The most challenging problem with MRSA is its resistance to antibiotics. A 2004 study shows promise that essential oils may thwart the MRSA’s ability to mutate and resist.

Methicillin-resistant Staphylococcus aureus (MRSA) was first discovered in the UK in 1961 and in the US in 1981. MRSA became international news in the late 90s.

Traditionally hospitals use bacteria-killing chemicals to clean surfaces, to sterilize instruments and to decontaminate the skin before surgery. It has been argued that these sterilizing processes inadvertently help to spread bacteria causing them to become resistant to the anti-bacterial agents.

Hospitals in England have often been accused of poor hygiene, but a study examining anti-bacterial products, specifically disposable wipes, suggested that instead of preventing hospital acquired infections, these wipes were actually spreading bacteria, due to their improper use by hospital staff. (Telegraph UK 2008, BBC News 2008). 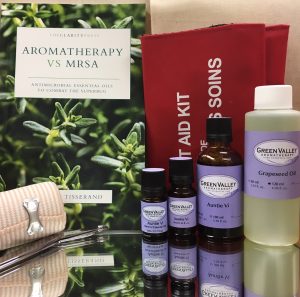 Several studies done by major universities in Britain in 2000, showed more than 7000 hospital-based MRSA infections per year and of these about 30% of people die. Due the British public’s concerns about going into hospitals, the BBC polled 1040 people about their concerns. 40% said they were concerned about the risks of contracting MRSA and a further 31% indicated that they would consider avoiding surgery altogether due to the risk of contracting MRSA.

Currently all studies that are looking for agents that will eliminate the “superbug” (as it has been labeled), are funded or driven by allopathic or conventional medicinal organizations. There are some individuals, universities and businesses, which are working to find natural or alternative options; for instance the University of East London, England has had some success with Allicin, a compound found in Garlic. There have also been reports that maggot therapy works well in eliminating the bacteria.

Dr. Peter Warn, a researcher at the University of Manchester England, told BBC reporters in December 2004, that he and his team had done research on essential oils and MRSA and they found that three essential oils that destroyed MRSA. (BBC News)

The most challenging problem with this bacteria strain is its resistance to antibiotics. The MRSA infection is being passed from humans to animals and is mutating within different species of animals. The theory is that essential oils are made up of a complex mixture of chemical compounds which the ever-mutating “superbug” finds difficult to resist. These compounds are naturally occurring and are derived from the plants from which the essential oil is made. Because no two essential oils are alike, they are the perfect complex compound to combat a mutating infection. Current treatments such as antibiotics are made up of single compounds so MRSA becomes resistant very quickly.

The biggest problem for the Manchester University research is funding. Because essential oils are naturally occurring, drug companies are not interested in investing in further research as they can’t make a profit from a product that is naturally occurring and can’t be patented.

*This is educational information and any opinions expressed here-in do not replace professional medical advice. If you are ill, see a suitably qualified medical practitioner.*